For the 3D printer project I decided that I wanted to use Tinkercad to create a 3D model of an axoltl.

If I had to guess I would say not everyone knows what an axoltl actually is, which is understandable. Basically axoltl‘s are a type salamander that stay in their larva form, meaning that they live underwater their whole lives and retain gills.  I have a pet axoltl and I had always thought it would be super awesome to create a 3D model of one. My overall goal then was that I wanted to create a basic model of an axoltl that I could print with another end goal of sharing it potentially on Thingiverse. 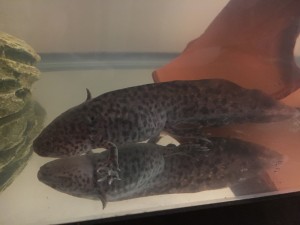 To start the project I sketched a super rough basic of how I would represent an axoltl. Originally I tried Sculptris for a short while, however I had could not get it to work well for what I was doing so I went to Tinkercad. In Tinkercad I  started building my blocky little critter. I began with the over all body basically blocked out then moved to trickier component making feet. The orange shape in the image below was my mock up of the body and the yellow pyramids I sliced up with holes for feet creating 5 fingers for front ones and 4 for the back. 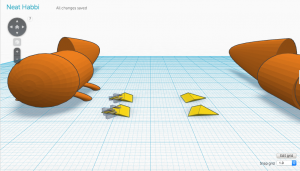 Once I had attached those I went through the process of figuring out how to create gills. Axoltl’s have 3 gills on each side of their head which move fluidly when they swim. Trying to capture this with geometric shapes proved to be an issue. 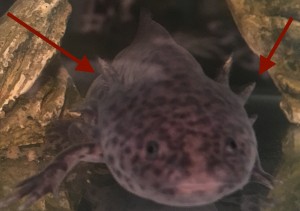 I ended up finding a snowflake shape and through trial and error worked with it until I created something similar to the gill. I did so by cutting the snowflake in half then combining it with a rectangle.

After I created the gill and was satisfied with it I went back to try and tackle some of the blockiness to my creation. I decided to try and add a neck and make the figure smoother. 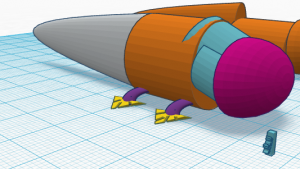 In retrospect I think this was when my project started to have failures that I had not anticipated. I will get into more detail about this when I get to my description of the printing phase. After fixing up a redurmentary neck I went to work putting the gills on. 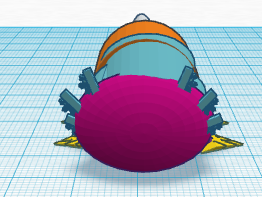 My plan was to worry about the face next and get back to fixing the blocky figure later. I created 4 holes in two different sizes and arranged them on the face to create the eyes and nose holes. 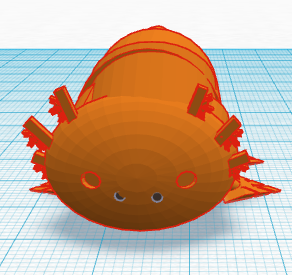 By the this point it was Wednesday and I had spent several hours already playing around with my creation, so I decided to try a trial run to see if he was even printable.

I downloaded the STL file and put the project into meshmixer where I generated supports (it was already clear to me that my print would need supports). After that I put it into the Dremel software and everything looked great! Until I hit build. Then I got this… 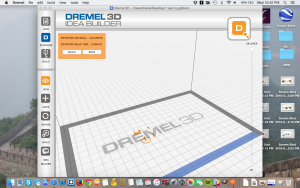 Clearly not what I was looking for or what I expected I hoped that maybe it was my Dremel software that had an issue. (I had expierenced a similar issue uploading from Tinkercad to Dremel in the past). So the next morning I tried putting the 3D model into Dremel again this time on a different computer. The results were slightly better, but still discouraging. I tried generating more supports and changing the size of the print in hopes that was where I went wrong, but still ended with the same image. 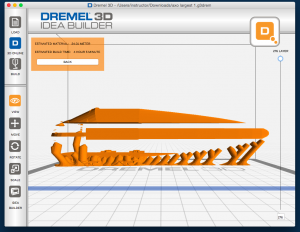 At this point I was pretty frustrated so I started to do some research into what I might have done wrong. The files did not seem to have been corrupted and everything looked okay when I went back into Tinkercad. My best guess was that when I tried creating the neck I had left an empty space somewhere that was throwing the whole thing off. So I tried to fix that and got this.

Creating a smooth 3D object in Tinkercad is difficult and the more I worked on it the more issues I had. The model above also would not print so on a whim I tried downloading the original model just to see what happened.  Somehow Dremel now thinks it can print the very bottom half of my object. 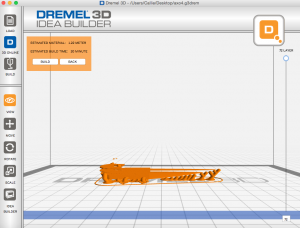 I am at a loss for why now it thinks it can print more of the object when it could not print anything the first time. However, in the bottom half of the model it looks like the toes might break off very easily which would not be ideal. So even though the model is not printable yet it still was able to give me ideas on what I need to improve.

Currently I am considering  trying to go back and play around with the original model to see if it is salvageable. If I really get stuck I may also go ahead and start from scratch and make a new model, then just test that again. Ultimately, I hope that I can figure out what happened and that very soon I have a model that looks more promising to print.