After a semester of learning I finally completed my axolotl fish tank! 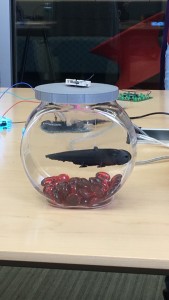 In the end it did not work exactly how I had expected. The way I rigged up the axolotl the string was next to the motor but still not close enough that the motors vibrations would move it. However because the lid was slightly larger then the lip of the bowl the motor moved the whole lid back and forth. While this was not originally my intention it still created an effect that made the axolotl print move. So technically I did accomplish my goal of making the print move, although not in the way that I expected. Despite the fact that it did not work out just how I had planned I feel that I learned a lot in trying to figure out this project and really enjoyed doing it even through the frustrating moments I am still happy that it at least moves in some way!

(Note I will update this with a video of my project however right now my project is in the Thinklab and I haven’t had a chance to get in there and record it.)