For quiet a few frustrating hours I struggled to alter my design so that it would actually be printable. I tested out a variety of supports or no supports just to check all the potentials. I trial ran every angle of support for Dremel supports in Meshmixer and every single one would not print in the Dremel software.

When I downloaded the file to work with I kept trying to fix it in Tinkercad and in the end had 7 downloaded files from the Tinkercad I had been working with. In a confusing turn of events the files produced a series of incomplete designs none of which worked. 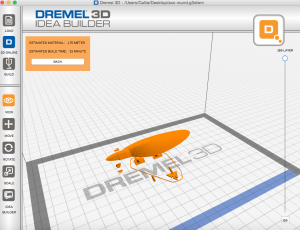 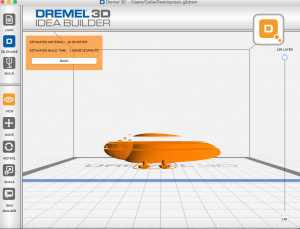 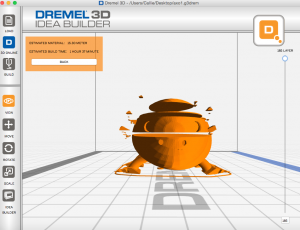 The fifth copy of the design was the closest to printable but was still very far off. I was unsure why each copy of the exact same file created a different glitch in the print. After a solid half hour of checking between the designs I still did not have a clue why copy 5 almost worked and the others did not. After failing at recreating the steps to recreate another like copy 5 (under the hopes I could fix it from there) I decided it was time to go another route and go minimalist.

Eventually I just had to give in to the design being simpler and decided to take a step back in the process. I tested to see if the project would be successful in Dremel without gills. On the very first try it worked! 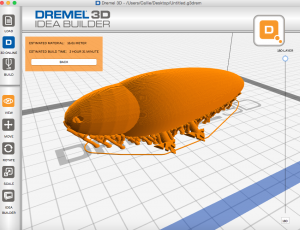 So next I figured why not try very simple gills. I had considered still looking for curved gills but decided i needed to start simpler at first with pointy ones. To great shock I put that into Dremel and it looks to work too! 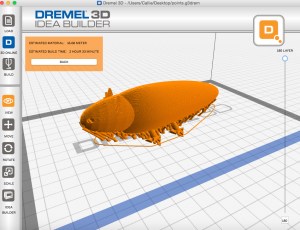 The next morning I went in and set it up to print. However, I tried 3 different times to print it in three sizes each time it failed on the front left leg. I tried to retape the platform just to see if that was a potential cause of the issue. It was not and the print still did not work. My next step now is to go back into Tinkercad and try to see if the feet are either uneven or if they just need to be redesigned all together. Hopefully after that whole process it will finally print.