Brittany and I finished our cardboard robot last week. When we reached the point that everything on the robot was assembled except the head we realized that we had a issue with the design. Our robot could sit (kinda) and he could only stand occasionally when positioned at just the right angle and not for very long. 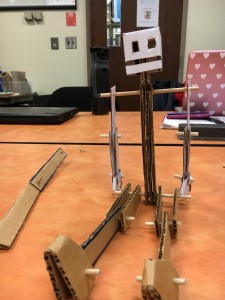 So we decided to improvise. When playing around with the robot we noticed how he was inclined to just fall over. I recognized that he kinda looked like those toys where a figure flips on a bar like a gymnast. So we decided to create a little bar for the robot to do flips over and some cardboard supports on either side to hold. 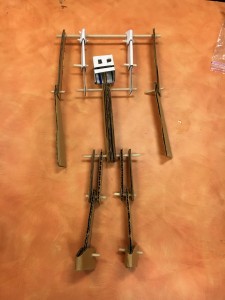 Then finally we not only had a posable robot but also a robot who could do flips.